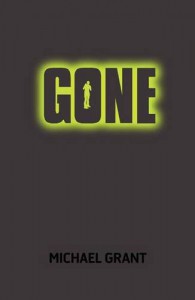 I finished Gone about 18 hours ago, which means I've had a lot of time to think about it.

My first thought after putting down the book was that it was one of the weirdest things I have ever read. It certainly wasn't what I was expecting. The first few pages stalled me despite throwing the reader straight into the plot. I don't know why I wasn't motivated to keep reading! It took an extremely boring part of a video game to finally drive me into the pages of the book.

I read for the next four hours, finishing up at about two in the morning. I think the thing I liked most about this book were the characters. Sam was an excellent lead, Astrid wasn't too annoying for a main girl lead (I find them to be really frustrating sometimes) I loved Edilio, hated Quinn, but my favourite character by far was Lana. She was tough, smart and not chicken at all. For example, I probably would've vaporized from fear on the spot when she heard the first talking coyote (also done really well... One of the freakiest things I have ever read in a book), but she was like 'meh. I'm gonna head out there and use the loo.' It also didn't hurt that she had the handiest power as well.

The kids from Coates were downright creepy and should've all been locked up. I really hope Drake meets a very nasty end. And shame on you, Quinn, for not shooting the crap out of him when you had the chance!

The overall impression I got was that Grant had read 'Under the Dome' by Stephen King and decided to copy it. Albeit, there were huge differences, but there were also a lot of simularities; the bullies that decide to take over and use the opportunity to wield their own twisted version of leading (Caine, Orc/Big Jim), the natural leader who everyone automatically looked up to in times of need but was immediately seem as a threat by the bullies (Sam/Dale Barbara) and the main female lead who had some strong points and wasn't about to be pushed over easily and eventually gets together with the main dude (Astrid/Julia).

I bought this book because I had heard so many good things about it (it also didn't hurt that it had a quote on the back from Stephen King, saying that he loved the book (well isn't that a surprise?) instead of a quote by Stephenie Meyer) and found it to be a... very different read. I know I initially said that I wouldn't read the next two, but I said that this morning after waking up from some very crazy dreams induced by the book, but now that I've had time to think about it, I find myself wanting to know just how it ends. So maybe I will read the next two. Maybe.

(by the way, if there's ever a zombie apocalypse, dibs on Lana Lazar as my main girl)