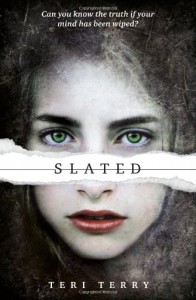 Slated by Terri Terry took me by surprise.

I bought this book on a whim from K-Mart one night when I decided that my to-read pile wasn't already big enough. I was drawn in by the cover (no guy on the front, good start) and then the blurb.

I started reading Slated that night, and was immediately sucked in. Kyla has been Slated, and has no memory of anything before the hospital she's currently residing in. She's had to relearn everything, including walking and talking, and as the book is written in first person, a lot of the time it sounds like a child narrating what's happening - a very nice (and subtle) touch.

Kyla's new home has a mother, a father, another Slated girl called Amy, and a cat who can pull her levels back up just by being there. Kyla has a device called a Levo on her arm, a device meant to knock her out if there is any disruption in her emotions.

Kyla's Levo seems a bit defective, however, when her happy levels go up when she's stressed or angry. As well as this, Kyla is remembering things she shouldn't be, such as how to drive, the fact that she hates broccoli and can draw better with her left hand. Throw in some truly disturbing dreams and we've got an interesting MC.

The thing I really really loved about this book was the feeling that Kyla was watched, all the time, everyday. It got me, as a reader, on edge, whenever Kyla bucked the rules or revealed something to her friend, Ben, that she shouldn't have. People are disappearing left and right at her school, taken by Government men called Lorders, and Kyla's getting pissed.

Terry's imagery, voice and characters come across with a unique feel that I've been missing from YA books of late. I cannot wait to get my hands on the sequel.
Tweet