No One to Save Her 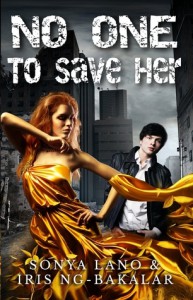 This is the first collaboration I’ve read between Sonya Lano and Iris Ng-Bakalar, and I just have to say:

Two authors writing a novel together is hard. There’s the plot, writing style, character choices, even down to what kind of romance; this all needs to be decided beforehand and unless the friendship between authors is strong, can lead to all kinds of kerfuffles about who writes what and the direction the story takes.

I’ve never seen two authors meld better than these two have. Their writing styles are so similar that even after reading (two, three books?) of Sonya Lano’s I couldn't tell who was writing which character. This allowed the story to flow in a beautifully linear fashion, and character changes didn’t feel abrupt or unnatural.

The two characters, Serycia and Soren are extremely well rounded and fleshed out. Soren is a Level One, which means he’s a street-hardy, cautious guy who always expects the worse. Serycia is a pampered Level Seven mistress and often goes rushing blindly into situations; she just hasn’t been taught to second-guess anything and this really fits with her character.

At first I was worried that Serycia would be a real damsel-in-distress and Soren would always come rushing to her aid. But as her character was introduced more and more, we discovered that she was actually a very intelligent individual with a healthy dose of interest in science, and had been one of the most important members in the race to discover the antidote to the plague that kills them off when they reach 25. It was briefly described that her master, Cipher, loved her so much he enrolled in online classes that she would then partake in, and contribute research to the other scientists looking into the virus. I had this image of her sitting in front of a computer in silks, the surrounding desk covered in papers as she argued genetics with scientists. It added a great contrast to her character, and this resolved any fears I had for her being a, well.. useless character.

I’m so glad this is a trilogy, because the ending was so epic it didn’t answer a lot of things – this is good. I want more, and I wouldn’t have been happy if the answers had been laid out in the final few paragraphs.

The romance between Soren and Serycia, while well-done, had a few frustrating moments in the end. Stuff that a simple sentence between the two could’ve fixed, but instead led to them making eye-contact and assuming the worst, then running off before anything could actually be said. This is a common trope in many forms of media, however, and NOtSH certainly isn’t the biggest criminal in this regard. There was a secondary romance in the novel I also enjoyed greatly.

Little things stood out to me in this novel; scenes that just made me cringe through their goryness – see the scene where Serycia, desperate for plague samples, cuts an Infected open and rips out his liver; I’ve never read a scene this meticulously, medically researched. And some scenes were just so alive and interesting – the scene on Level 2 (or 3?) which takes place in a club whose members are addicted to Lionine, a drug which makes the user repeat thoughts or dialogue. The way they’re written, with little rhymes and sing-songs, is amazingly methodic and rhythmic.

This book is a stunning example of two authors who work exceptionally well together and have created something well worth reading. I recommend you get your hands on a copy ASAP.
Tweet