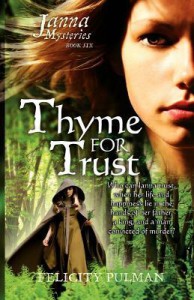 Thyme for Trust is the last in the Janna Mysteries, and this was the first time I'd read it, despite having read the first three about four times each.

I liked the way the series ended, even if I was Team Hugh.

There were a few bits that made me wrinkle my nose. A lot of it felt mechanical, and as if they only happened because Janna needed them to. The 'Siege of Wiltune' that made me hella worried from the back cover took up about half a page, and it only served to kill her father off, who stood in the way of her marriage to Godric. And Janna was sad for all of two sentences, until Godric scooped her up and she could announce her intention to marry him now that her father was out of the picture. Deus ex machina a little. Bothered me.

Also, the whole end with Robert of Babestoche killing another of his lovers off felt as though it played a part only for the mystery that needed to be solved by Janna. It was bloody obvious the whole time, and only seemed to serve the part of being the reason for getting Robert into court, where he could also be tried for the death of her mother. The whole scenario felt weird and forced, and very very transparent.

Also, I would've really liked to see Robert of Babestoche hang. Like, I wanted to read the scene with him dying. It would've been so damn satisfying.

I'm using this review space as kind of a commentary on the whole series, so I'll say this as well - the mysteries in these books are not shockers. Nothing really came out to surprise me. I kind of liked that though, I could piece the clues together on my own time.

Overall, I loved this series and read the last two books in a day. It's such an interesting insight into medieval England and the research was superb. Very glad I own some of these books, I'm sure I'll have a daughter one day who will love them just as much as I do.
Tweet